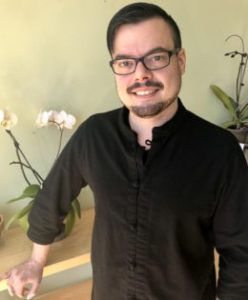 Jean-Rafael R. Heiz-Neri is a licensed acupuncturist based in Chicago; his father is French and mother is Venezuelan. His diverse cultural background has given him the opportunity to apply a number of healing techniques from various cultures. JR no longer approaches medicine from a traditional or alternative view, rather his approach is complementary. He believes that health is a state of balance and disease. JR smiles when he witnesses his patients get better as a result of their own ability to acknowledge, feel and heal on their own.
His experience in Nanjing Hospital in China, in which he treated on average 100 patients a day (the hospital saw at least 300 per day), has greatly strengthened his skills as a practitioner. He has saw a variety of diseases that under the guidance of experienced native Chinese medical professionals including acupuncturists, medical doctors, naprapaths, and herbalists. With the volume of patients he treated and the knowledge from generations passed down, he has been able to acquire much more experience in a rather short period of time than the typical acupuncturist does here in the United States.

Are you ready for results?

Made with ❤ by HOLSITIC WEB HOLDINGS, LLC​